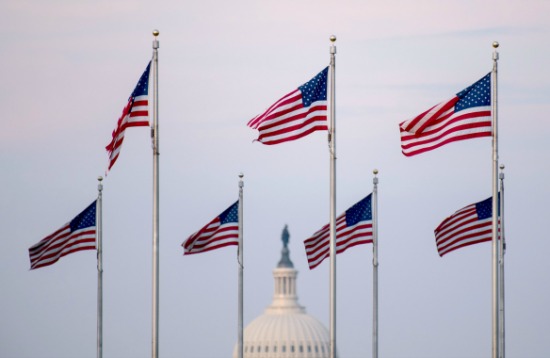 My friends are a model of religious pluralism. Put them all in a room, and they’d look like the Parliament of World Religions—Buddhist, Muslim, Catholic, evangelical, and more, with plenty of atheists and agnostics in the mix. Many of them are in interfaith relationships. When you ask them about their beliefs, they’re likely to talk about family traditions or journeys of self-discovery. They are less likely to bring up absolute truth. Nor will they talk about a life-and-death battle for souls, or some struggle to transform the culture.

It’s a tableau of tolerance. But when you flip things around and look at politics, the picture suddenly gets pretty tribal. My friends are almost exclusively liberals. In contrast to all those interfaith couples, I can think of just one relationship that crosses partisan lines.

Meanwhile, my politically active friends are not likely to talk about their political beliefs in terms of personal choice or self-discovery. But they are likely to explain their affiliation in terms of deep moral commitments and high social stakes.

The people I know are ecumenical in their religious values. But, rightly or not, they are dogmatic in their political commitments.

While this experience is not universal, I also do not think it is unique. Social science research about American society supports that hunch. In a lot of ways, the country seems to be getting less religious, more pluralistic, and more tolerant. But at the same time, partisanship is coming to look more and more like a muscular, tribal—almost religious—kind of identity.

What’s at issue here is a kind of moral tribalism. By that, I mean the tendency of people to link beliefs about the nature and direction of the world (this is the way things are, and this is the way things should be) with a deep sense of membership in a particular group. For a long time, many Americans have assumed that religion is the great source of moral tribalism in our society.

The assumption makes sense: Religious identity is thought to be fixed, fundamental, and uncompromising. It is often divisive. Politics, by contrast, looks more like high-stakes shopping: people sit down, consider all their policy beliefs and other group memberships, and then choose a side.

There’s a longstanding secular fantasy that, if we lose religion, we’ll also lose moral tribalism; beliefs about the Good Life and the Good Society will be less entangled with all this ritual-communal stuff, and more open to calm, thoughtful analysis—something closer to the ideal of politics. And while there are some clear exceptions, religion in twenty-first century America does seem to be less oriented toward moral tribalism. For one thing, many Americans are quietly disaffiliating from any kind of religious identity. Roughly one in five Americans (including 34 percent of millennials) don’t identify with a religious group at all. Among the affiliated, denominational switching is very common. And on perhaps the single biggest test of tribalism—the tendency to only marry within the group—the data is clear: Rates of religious intermarriage are rising.

As the Canadian philosopher Charles Taylor put it in his 2007 opus, A Secular Age, we are moving toward a future “in which the gamut of … religious allegiances will be wide and varied” and where there may be “a much lower rate of inter-generational continuity of religious allegiance.” Fewer religious communities, Taylor writes, will “claim to provide the indispensable matrix for the common civilization order.” Instead, the picture probably looks like the friends that I described earlier—spiritually-engaged people, yes, but people who don’t accept religion as a barrier for getting along with others or choosing a spouse, who mix and match beliefs, and who don’t feel comfortable making religious claims to absolute answers about the best way to live or build a society.

Moral tribalism isn’t dead, though. To find it, you just have to look to politics.

Partisan animosity isn’t new, of course. But in the past few decades, it seems to have intensified, and to have taken on higher stakes. Consider a recent study from the Pew Research Center about partisan animosity. Over the course of two months this spring, the pollsters asked close to 4,400 Americans a series of questions about political parties. They found that Americans are much likelier to frame partisan animosity in stark terms of fear and moral anger. “For the first time in surveys dating to 1992, majorities in both parties express not just unfavorable but very unfavorable views of the other party,” Pew reported. Additionally, “sizable shares of both Democrats and Republicans say the other party stirs feelings of not just frustration, but fear and anger.”

“Once people join a political team, they get ensnared in its moral matrix,” writes social psychologist Jonathan Haidt in his 2012 book, The Righteous Mind. “They see confirmation of their grand narrative everywhere, and it’s difficult—perhaps impossible—to convince them that they are wrong if you argue from outside of their matrix.” For Haidt, political affiliation is linked to deeper worldviews that make citizens resistant to the ideas of others. And Haidt sees a recent “shift to a more righteous and tribal mentality” within American politics.

That shift is not only expressed through surveys and opinions. Certain demographic indicators of tribalism have also increased. People are seemingly likelier to live around people who share their political beliefs. And, once again, some of the most striking evidence of a shift comes from marriage statistics. Shanto Iyengar, a political scientist at Stanford who studies political polarization, described the change here as “dramatic.” In the 1960s and 70s, something like two-thirds of married couples came from the same political party (as Iyengar points out, even if marriages were totally random, 50 percent would be between people with similar political affiliations). Today, that number is closer to 90 percent.

A 1960 survey found that around 5 percent of partisans would mind if their sons or daughters married someone of a different political party. “They really dismissed the question as irrelevant,” said Iyengar, who has dug into more detailed reports from the 1960 study. A 2010 YouGov poll asking the same question found that 49 percent of Republicans and 33 percent of Democrats would be somewhat or very upset if their child married someone from the other political party. In his research, Iyengar has found that people with a partisan affiliation will even discriminate against people of another party when asked to review hypothetical scholarship applications or play basic trust games with another person.

What’s going on? Iyengar links this shift, in part, to changes in how people get news. “It’s not a coincidence that affective polarization has taken off in the last 20 years, precisely at the same time as the media environment has exploded,” he said, referring to the growth in outlets that cater to particular political views (think Fox and MSNBC).

Like many political scientists today, Iyengar understands partisanship not just as a choice, but as a deep social identity. In our conversation, he noted that this identity tends to form early in life and stay stable over time. “In that sense it’s almost like your gender identity or your racial identity,” he said. “It’s just fixed. It’s bedrock. These other things, about candidates and issues, are much more ephemeral.”

To be clear, I do not think that the lesson here is that religion and politics have switched places, or that partisanship has become a new kind of religion. The relationship between values, group membership, and individual identity has always been complex. Especially in this year’s election, racism adds another dimension to partisan tension. Glib statements along the lines of politics is the new religion don’t capture the particular histories of religious and partisan identity.

But the moral tribalism of contemporary politics, and the concurrent loosening of religious bonds, does challenge a very common set of assumptions about the relationship between religion and politics. Under these familiar assumptions, religion is thought to be the more foundational kind of identity. And partisan identity is depicted as mutable, and as secondary to all the other ways that identity intersects with values. For example, commentators will often ask why evangelicals tend to be political conservatives. It would be almost unthinkable to even frame the question the other way: why do political conservatives tend to be evangelical? That’s because we think of the evangelical identity as more fundamental than the conservative identity.

When we revisit these assumptions, the results can be surprising. That’s a starting point for the work of University of Pennsylvania political scientist Michele Margolis, whose early research suggests that while religious identity can shape political identity, the reverse is true as well: Political identity can actually affect religious choices. “A big chunk of the public opinion and American politics research … was about asking how people form their identities—why are people Democrats or Republicans?” Margolis told me. Now researchers are asking, “What are the consequences? What does it mean if you identify as a Democrat or a Republican?”

And why shouldn’t it? Religion doesn’t have a monopoly on moral urgency. The linkages between group identity, moral claims, and beliefs about social welfare are diverse. They’re also variable. Yes, our society has gotten more pluralistic and more secularized. But that does not necessarily eliminate tribalism.

Michael Schulson is a freelance journalist and an associate editor at Religion Dispatches magazine, where he co-produces The Cubit.