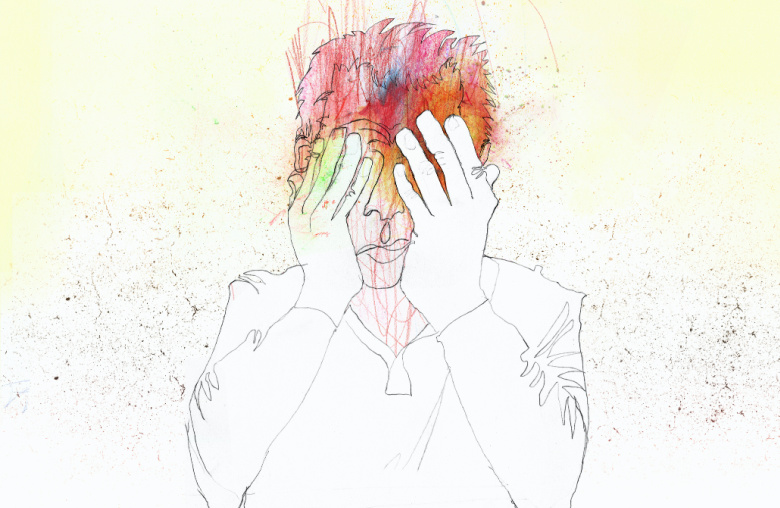 “I need help. I feel worse now than I’ve ever felt, and I’ve felt bad for a long time,” I told the attending nurse at the student health clinic at the university where I was writing a doctoral dissertation on the integrity of the self in modern Christian thought. The methods of coping that had enabled a baseline functionality had been devoured by the twin-beasts anxiety and depression.

The onset of generalized anxiety disorder typically begins in late adolescence or early adult life. The Diagnostic and Statistical Manual of Mental Disorders (DSM) classifies an anxiety disorder as persistent symptoms lasting for at least one month. I was 23 years old when I experienced my first major anxiety attack. But it was not until shortly after turning 30 that I sought professional help and found it—in the care and ministrations of the empathetic physician and the psychiatrist on call, and eventually in psychotherapy and psychiatric networks outside the student health system, including psychoanalysis.

I had battled persistent symptoms for eight years—with some periodic ebbing of their force—and can say with certainty that the chestnut “what doesn’t kill you, makes you stronger,” commonly attributed to Friedrich Nietzsche, is a bad joke.

Do I wish I’d reached wit’s end earlier—the realization that I could not extricate myself from inner torment? That I’d exhausted every available resource—prayer, alcohol, magical thinking, alternative medicine, healing teas, and journaling? Of course, I do. The business of keeping mind and body intact, of trying not to break down when every nerve and muscle seems to be rising to a panic, is exhausting. Time lost to mental illness is a sadness of the sort I would imagine anyone feels in view of unfulfilled hopes and opportunities squandered.

In seminary and in graduate school, when I lived with undiagnosed and untreated anxiety, I read the seminal works in psychology and religion: Carl Jung’s Memories, Dreams, Reflections; Erik Erikson’s Young Man Luther; and, of course, Sigmund Freud’s Future of an Illusion, which remains one of my favorite books to teach. Still, even as I developed skills of critical thought—and indeed, I was encouraged to think critically and read expansively by such evangelical thinkers as Francis Schaeffer and Carl F. H. Henry—I knew nothing of psychiatry, psychopharmacology, and psychotherapy as avenues to healing. I had early on absorbed the belief that psychology was the devil’s playground. The true Christian did not need the “the pseudosciences of psychiatry and psychology,” as one influential pastor refers to the assets of the mental health profession, because the true Christian lived in an intimate relation to the Ultimate Healer, and because suffering—even the torments of mental illness—was often but a channel through which one’s own dependency on, and thus intimacy with, Jesus could be realized.

Had I practiced certain forms of Christian Pentecostalism, or lived in seventeen-century England, I might have understood my affliction to be a form of demonic possession, and in the latter case, seized from my bedchamber, strapped to a horse, and left in the Glastonbury madhouse to be prayed over by church ladies until my blasphemies subsided. “Madness was thus a desperate, acute phase in the trial and redemption of souls,” historian Roy Porter explains, “because it brought a sinner into a state of crisis, and provided the prelude to recovery.”

But evangelical Christians like the Baptists among whom I grew up in 1960s Mississippi had different ways of understanding anxiety and depression—and these may have been more harrowing.

Demons can be exorcised. But a test of faith, or a spiritual trial, must be endured for the sake of holiness.

Initially, the onset of mental illness threw me back on Oswald Chambers’s My Utmost for His Highest. Next to the Holy Bible, evangelical Christians revered no book more than Chambers’s devotional classic. My mother gave me a copy the summer before I began high school—the Dodd and Mead edition, a handsome volume, small enough to fit into the pocket of a backpack. I’d carried it with me as I endeavored to win the lost teens of lower Alabama for Jesus and to keep myself pure and unspotted from the world. But the more I read Chambers in the throes of mental distress, the worse I felt. I wince even now as I scroll through the punishing entries of this book that my fellow believers cited with canonical reverence. To wit: “Count it all joy when you fall into trials and tribulations. Consider how great a gift is bodily affliction. Bear the scars of the Messiah, and rejoice. Each time a believer is chastised by God and becomes sick, he should be glad. Do not scurry around in search of healing. The father of spirits crushes us for our good, that we may share his holiness.”

What was happening was that God had chosen me to bear his scars—but my cross would take the form of smothering phobias, hyper-bodily awareness, heart palpitations, panic sweats, and ambient apocalyptic broodings. I should count it all joy to have been so called—not only to endure these symptoms, but alas to rejoice in them. The idea of mental illness remained circumscribed by the conviction that I needed only to dig deeper in the Word, and somehow remain loyal to the claim that I was too blessed to be stressed. Praise to the Lord for unexamined psychic conflicts and biochemical upheavals.

My inability to accept professional help, to even imagine its value, strikes me as the most heartbreaking part of the religious formation I received as a child and young man—a formation that served me well in some ways. It also strikes me as typical.

Religious people—and I still consider myself to be Christian—have a way of idealizing our emotional and mental lives, to create an idealized version of ourselves that, in turn, judges us and inhibits us from growth and from admitting that we’re suffering. In the last major survey of evangelical attitudes towards mental health, conducted nearly a decade ago, we learned that 48 percent of all self-identified, born-again Christians believe that illnesses such as bipolar disorder and schizophrenia can be cured “through prayer alone” and should be treated as a spiritual problem. Guilt and shame enable a “proper reaction to genuine wrongdoing compounded by self-deception.”

In a recent discussion with a group of 20 college students on my new book Evangelical Anxiety: A Memoir, a sophomore English major from Farmville, Virginia, asked me how I felt about the years of living with an undiagnosed and untreated anxiety disorder. Did I feel regret? How do I think about time lost to mental illness?

After some initial throat-clearing, I said, yes, I feel regret. I regret all the ideas and experiences blocked or truncated by anxiety’s capricious demands. I regret the time I set up an independent study on Husserl’s Logical Investigations with a renowned philosopher only to silently disappear when my anxiety erupted days before the first meeting. I regret cancelling speaking invitations at the last minute—invitations that had felt enlivening when first received—over worries that panic would undo me if I went through with the gig. I regret the distrust through which I came to filter opportunities for growth, collegial relationships, and perceptions of my body. I regret how my anxiety made me an inattentive husband.

Each person is unique in their capacities for inner torment and in the limits of what can be endured. That I muscled my way through two master’s degrees and a doctorate no doubt attests to a certain measure of resilience. But I read and wrote and moved within such constricted boundaries. Each day felt like a precarious trek in a soulscape of undetonated mines. Avoiding the dreaded objects and experiences that I had come to associate with debilitating fear narrowed my expectations and hopes—and not in the way that reality chastens idealism, but out of exhausting fears that thwarted rational decision-making and creative pursuits. The anxiety that Jesus will return again and you’ll be left behind, which loomed over the minds of every evangelical child of my generation, creates a special kind of anticipatory fear. It is one that endures long after the doctrine has collapsed into doubt or disbelief.

I told my students all this. But I also wanted to tell them that I have found ways to turn the raw material of mental illness into fulfilling projects and life experiences. I would not want to call my suffering redemptive. But I would say that the anxiety that persistently intruded into my work and leisure did not extinguish the spirit of life. My evangelical anxiety is finally a story about shared human longing for wholeness—and it’s a story that turns on a chastened view of our capacities for autonomy and control.

What I remember most vividly of that long-ago afternoon at student mental health is the immediate bodily relief produced by my pleading—indeed by my confession, spoken aloud to the attending nurse—that I could not extricate myself from mental suffering. I needed help, and simply the act of finally asking a clinician for that help was the beginning of succor. Or, better, the beginning of answered prayer. After trying for so long to calm the mental storms out of my own depleted resources, coming to the knowledge that I could accept the therapeutic work and the medication as God’s gift, was the saving grace I needed.

The realization of such commonality awakens us to a need for others that is born not of weakness but of love. Late on the second Sunday night of November, with Charlottesville under lockdown after the mass shooting that left three people dead and two hospitalized, I sat in the darkness of my living room, emailing those selfsame students, offering my fervent hopes for peace and safety, along with my cell phone number. Text or call, if you want to talk, I said. I’ll be up. In those hours against unspeakable tragedy, I understood, once again, that the strongest antidote to fear is the knowledge that we are not alone.

Charles Marsh is a professor of religious studies at the University of Virginia, where he also directs the Project on Lived Theology. He is a member of the National Advisory Board of the Danforth Center on Religion and Politics, which publishes this journal. He is author of eight books, including his most recent, Evangelical Anxiety: A Memoir.