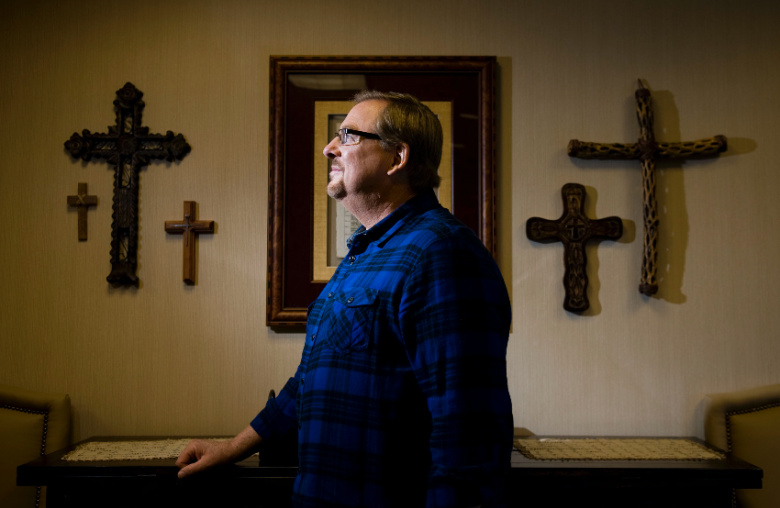 When Rick Warren stepped behind his church’s hand-carved pulpit for the last time as Saddleback’s senior pastor in August, he did something unexpected. The 68-year-old founder told his congregation that he would repeat word for word his first sermon at Saddleback in 1980. “It is the dream of welcoming 20,000 members into the fellowship of our church family … it is the dream of at least 50 acres of land, on which will be built a regional church for south Orange County,” Warren said in the sermon, titled “The Beginning of a Miracle.”

Warren’s audacious vision came true. Saddleback, which met in 79 locations in its first 15 years before finding a permanent home, grew to be among the country’s biggest and most influential evangelical churches. Warren himself became one of the best-known Christian leaders in America, owing to his 2002 book, The Purpose Driven Life, a publishing phenomenon with more than 50 million copies in print.

How did he do it? And what’s next for Saddleback without him?

Like all evangelical entrepreneurs, Warren didn’t simply leave everything up to God—he had a business plan. When Warren was a student at Southwestern Baptist Theological Seminary in Fort Worth, Texas, he studied the writings of church-growth advocates such as Donald A. McGavran and C. Peter Wagner. Warren and his wife, Kay, also attended a conference in Southern California hosted by televangelist Robert H. Schuller. Warren was struck by their practical advice for reaching the unchurched.

Warren absorbed himself in demographic research to decide where to plant his own church. He eliminated Southern Baptist strongholds, reasoning that those markets were saturated. Warren discovered that the three most unchurched states were on the West Coast: Washington, Oregon, and California. He drilled down further and focused on four metro areas: Seattle, San Francisco, San Diego, and Orange County. Warren spent much of the summer of 1979 examining demographic trends of those regions. He determined that Orange County’s Saddleback Valley was “the fastest-growing area in the fastest-growing county in the United States during the decade of the 1970s,” as he wrote in his 1995 book for evangelical pastors, The Purpose Driven Church.

Warren had to figure out his church’s niche in a county that already boasted high-profile ministers such as Schuller and Calvary Chapel’s Chuck Smith. Warren spent 12 weeks knocking on doors in his new community. If the person said he or she already belonged to a church, Warren moved on to the next house. His survey revealed four common complaints: Church is boring, church members are unfriendly to visitors, churches care more about money than people, and churches don’t offer quality child care. He pledged to build a church that would minister to those needs.

Warren synthesized all that he had learned into a letter mailed to 15,000 households promoting Saddleback Valley Community Church’s first service on Easter. (He pointedly omitted “Baptist” from the name to avoid alienating unchurched people.) The letter began: “At last! A new church for those who’ve given up on traditional church services!” Then it recited the four complaints from his survey and explained how his church would be different. “We’re a group of friendly, happy people who have discovered the joy of the Christian lifestyle,” it read.

Sixty people showed up for Warren’s dress rehearsal on Palm Sunday on March 30, 1980. That was the day he outlined his remarkable vision for Saddleback. A week later, about 200 people gathered for Warren’s Easter service at Laguna Hills High School’s theater. Few of them were believers, but week after week, more people committed to Christ.

Warren sharpened his outreach methods through doctoral study at Pasadena’s Fuller Theological Seminary, a center of church-growth teaching. Warren invented an affluent baby boomer archetype he called “Saddleback Sam,” who would be his target audience. Sam was a college-educated, white-collar worker with a young family. Health and fitness were high priorities, but not “organized religion.” Sam preferred casual dress and informal meetings. He enjoyed the laid-back Southern California lifestyle, but shouldered the burdens of a mortgage and credit card debt.

Saddleback’s “seeker-sensitive” services were designed to be nonthreatening to someone like Sam, so no arcane Christian terminology or dogma. Uptempo contemporary music created a celebratory atmosphere. There was no dress code, and Warren himself disarmingly wore Hawaiian shirts. He crafted his messages to be relevant to people’s felt needs.

Once Warren enticed Sam to attend a service, he developed a blueprint to deepen his involvement. “Like a research and development center, we’ve experimented with all kinds of approaches to reaching, teaching, training, and sending out God’s people,” he wrote in The Purpose Driven Church. To become a Saddleback member, he required people to take a class and sign on to Saddleback’s covenant. Three classes steered members into progressively more demanding levels of commitment. Saddleback’s core consisted of lay ministers equipped to win others to Christ.

Warren keenly understood human behavior. Adults—especially men—have difficulty making friends. They yearn for meaningful relationships, but they don’t know how to develop them. If a church could be the glue to bring people together, they would stay engaged. Warren directed the formation of small groups with common interests who met weekly at a home for fellowship and Bible study. Everyone at Saddleback was expected to play a role, whether by directing traffic as a parking attendant or helping with youth ministry. Those were ways to foster connections and develop a sense of purpose.

One of Warren’s most important nonreligious mentors was Peter Drucker, a pioneer of management theory. Drucker taught that any enterprise must understand that noncustomers are as important as customers, if not more important. Drucker praised megachurches like Warren’s for having the insight to cater to the needs of nonchurchgoers, an idea that ran counter to traditional church mentality. He considered the megachurch movement to be as significant as the rise of the corporation in the first half of the 20th century.

Drucker said nonprofit organizations such as churches often lack a clear mission because they do not have a conventional “bottom line.” For that reason, they have an even greater need for good management. Any organization needs a leader with the communication skills to set priorities and the authority to make difficult decisions. Successful enterprises abandon projects that hinder performance and no longer produce results. Change-averse organizations that strive to “maintain yesterday” squander resources and obstruct progress, in Drucker’s view.

Warren applied these management principles to Saddleback and beyond. He led training seminars for pastors as early as the 1980s and founded the Purpose Driven Network, an association of thousands of churches around the world. Today, Saddleback is one of America’s largest churches. Before the pandemic, more than 20,000 people attended weekend services at Saddleback’s sprawling Orange County headquarters and satellite campuses in Southern California and overseas.

Warren discovered a passion for social justice surprisingly late in his ministry. Following his wife’s lead, Warren started a foundation to combat HIV/AIDS and assist orphans in Africa. He also launched a global initiative in 2003 he called the PEACE Plan, which mobilized local churches to be providers of health care, literacy, and leadership training. Warren’s expanding reach earned him slots at elite gatherings such as the World Economic Forum’s annual meeting in Davos, Switzerland. During the 2008 presidential campaign, he hosted Democrat Barack Obama and Republican John McCain in back-to-back appearances at Saddleback. Obama invited Warren to deliver the invocation at his inauguration in 2009. The Warrens’ personal lives were touched by tragedy in 2013 when their 27-year-old son, Matthew, committed suicide. They spoke openly about their grief and became advocates for expanding mental health resources.

In August 2021, I attended a Saturday afternoon service at Saddleback’s main campus in Lake Forest. The visit revealed a church in physical as well as pastoral transition. An extensive center for children was under construction and an overhaul of the worship center forced services outdoors under an expansive tent. Shaded under the intense summer sun, Warren took his congregation through a PowerPoint-style presentation on “strategies for stressful times.” He discussed five points to remember and five things to do in times of unwanted change, all connected to biblical passages. The congregation filled in an outline printed on three-hole punched leaflets to add to their binders. “As your pastor, it’s my job to help you through the tough times, not just the good times,” he said. “Let’s get really practical.”

By then, Warren had announced his plans to retire. Warren had long said he would step aside as Saddleback’s senior pastor when he hit the 40-year mark in 2020, but stayed put during that pandemic-dominated year. Warren followed Drucker’s advice that a leader should not choose his or her successor. Many family-run ministries, including the Schullers, have suffered when strong-willed founders stay too long or fumble the handoff to the next generation. Warren did not want a family member or a close associate to replace him.

Following a lengthy search, Saddleback leaders announced on June 2, 2022, that Andy Wood had been selected as Warren’s successor. Wood, 40, was lead pastor at Echo Church, a multi-site congregation he planted in the San Francisco Bay Area. The choice drew mixed reviews. Wood’s admirers praised his down-to-earth approach to preaching. His critics said Echo’s rapid expansion came at the expense of taking over smaller churches. A former staff member accused Wood of an authoritarian leadership style that created a hostile workplace. Saddleback commissioned a third-party review that cleared him of the allegations, and Wood took command at Saddleback in September.

Saddleback appears well-positioned for growth under Wood, who envisions more satellite campuses and training programs for pastors. The church boasts a robust online presence that will help it make up pandemic-related attendance losses. Like Warren, Wood’s career exemplifies the startup mindset that is so characteristic of evangelicals, but he will need to figure out how to apply it to such an established church. He would do well to bear in mind the guidance of its founder. “Older churches tend to be bound together by rules, regulations, and rituals, while younger churches tend to be bound together by a sense of purpose and mission,” Rick Warren wrote in 1995. “A church without a purpose and mission eventually becomes a museum piece of yesterday’s traditions.”

David Clary is the author of Soul Winners: The Ascent of America’s Evangelical Entrepreneurs, published in September by Prometheus Books. For more about the book, go to www.davidclaryauthor.com.