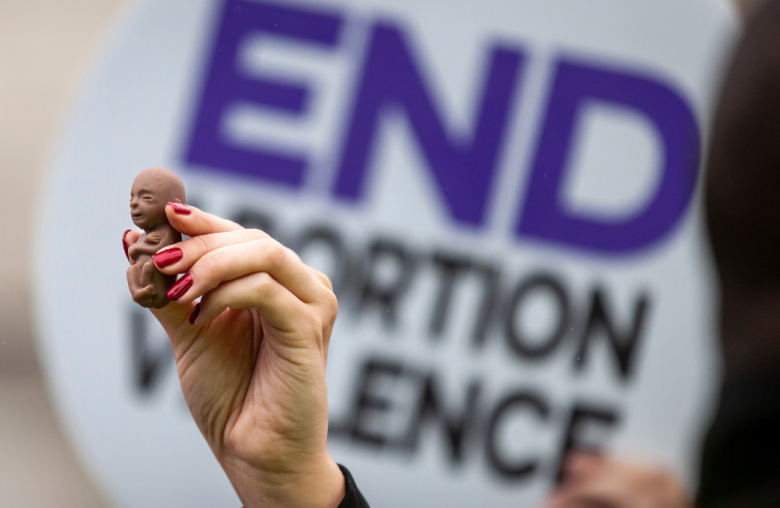 An anti-abortion activist holds a model fetus in front of the Supreme Court as they await its decision on Dobbs v. JWHO. (Allison Bailey/NurPhoto via AP)

The pro-life movement has long vilified Justice Harry Blackmun, whose majority opinion in Roe v. Wade struck down laws prohibiting or restricting abortion in many states and created a broad, constitutionally protected right to abortion. The most egregious part of the opinion, in the perspective of pro-life activists and citizens, is its flat denial of the personhood of the unborn. After surveying the history of abortion law in the past two centuries, Blackmun concluded that “the word ‘person,’ as used in the Fourteenth Amendment, does not include the unborn.”

Yet, at the same time that pro-life activists harshly condemned these words in the opinion, they took as gospel truth Blackmun’s immediately preceding claim: “If this suggestion of personhood is established, the [Roe’s] case, of course, collapses, for the fetus’ right to life would then be guaranteed specifically by the Amendment.”

Dobbs v. Jackson has overturned Roe (as well as Planned Parenthood v. Casey, which modified Roe’s constitutional basis and test), declaring that there is no constitutional right to abortion. But what does it say about the status of unborn life? It is not entirely clear. Writing for the majority in Dobbs, Justice Samuel Alito states that “our decision is not based on any view about when a State should regard prenatal life as having rights or legally cognizable interests.” So, after Dobbs, the fetus does not seem to be a person under the Constitution. But it is not not a person, either. It exists in a liminal state, capable of being construed as a person or as a non-person, depending on the perspective of the government of each of the fifty states.

It is worth recalling why the personhood of the unborn is so important to pro-lifers, many of whom are Roman Catholic or evangelical Protestant. Their fundamental moral commitment is to refuse any separation between a human being and a person. Because all human beings are made in the image and likeness of God, they are worthy of respect and protection. Pro-life advocates point to the moral disasters that have occurred in history when only a subclass of human beings are viewed as being worthy of the label of personhood, particularly the enslavement of African Americans and the Holocaust. They worry that denying personhood to the unborn creates a slippery slope. If the unborn aren’t persons because of their lack of self-consciousness, say, then what about those with advanced Alzheimer’s disease profoundly mentally handicapped individuals, or even very young infants? The fact that some philosophers (most notably, Peter Singer and Michael Tooley) have argued against the personhood of the very young, the very old, or the seriously mentally impaired, only exacerbates their fears.

Insisting on the humanity of the unborn, most pro-lifers describe abortion as the intentional killing of an innocent person–which, in their view, is always morally prohibited. But a key conceptual problem with abortion is that this is not the only moral description that applies, even if the fetus is a person.

One can also describe the act of abortion as the refusal of the pregnant woman to provide bodily life support to the person growing within her. This is what distinguishes abortion from the vast majority of cases of intentional killing. Carrying a child to term is not an insignificant physical burden. Moreover, unlike caring for a very old, very young, or very sick person, the physical burden on pregnant women cannot be shared. In the United States, at least, the risk of death from childbirth is significantly higher than the risk of death from abortion. Arguments that run in this direction have been more or less sidelined in the public discussion. Pro-lifers frame their arguments around how abortion intentionally kills an innocent person, while pro-choicers assert that a woman’s choice to terminate a pregnancy affects a potential life, not a person.

Why is this the case? In my view, there are two reasons. First, thinking about abortion under two action descriptions requires more nuance. But contemporary political debates in the United States favor sharp dichotomies. After all, abortion is a key element in the culture wars.

Pro-lifers rejected the analogy. With the exception of cases of rape, becoming pregnant with your own child is just not the same thing as being kidnapped and hooked up to a famous violinist. Relatedly, and in my view just as importantly, they were repelled by Thomson’s flippant and even cavalier tone. They saw her as reducing agonizing questions of life and death to a cutesy hypothetical in analytic philosophy.

But there are more relevant and challenging hypotheticals. The law does not force a father–or a mother–to give a “spare” organ or even to donate blood to a minor child, even if it is necessary to save that child’s life. The reason behind the refusal does not matter–what takes precedence here is the bodily integrity of the parent. That integrity cannot be impinged upon without the parent’s consent. Why doesn’t the same hold true for pregnancy? What is the difference between the two cases? Addressing these questions takes us immediately to underlying issues upon which there is even less consensus than abortion. But I don’t think they can be avoided now that the abortion debate has been returned to the states.

The first issue has to do with the nature and meaning of sex. Does a woman’s consent to engage in sexual activity mean consent to pregnancy and childbirth? Many pro-lifers will argue yes. Consent to engage in an act means consent to its natural and probable consequences. In contrast, many pro-choicers do not see the same strong connection between each and every act of sex with pregnancy and childbirth. In fact, many people think that connection–and consent–can be rejected by the use of birth control. At the same time, many people seem to think that consent to pregnancy can be established over time. It is one thing to get an abortion for any reason in the first trimester; it is a very different thing to do so without a good reason after 16 weeks.

The second issue has to do with the meaning and import of “nature,” and “the natural,” and therefore the meaning of embodiment as a man or woman. For many (but not all) pro-lifers, I think, the issue of consent is obviated by considerations of nature. Pregnancy is a matter of a woman’s natural being, not her express will. As a class, women are biologically fitted for pregnancy when they have sexual relations with men, so we do not need to enquire so stringently into their consent to carry and bear a child. In contrast, for many pro-choicers, women need to be seen as individuals, for whom the burdens and connections of pregnancy may impact their lives in different ways and different times. Pregnancy and childbirth are not only a matter of biology, but also of social location and social pressures, such as existing responsibilities, social and economic standing, and personal goals.

So, with Dobbs, the Supreme Court has not only returned the issue of abortion to the states, it has also pressed each state’s citizens to consider important underlying issues about sex and nature. Decoupling the personhood of the unborn from the legal permissibility of abortion makes these questions inevitable.

I wonder what would have happened had Justice Blackmun justified some abortion right without denying the equal dignity of unborn life. Would Catholics and evangelical Protestants have developed a different constitutional theory of “just abortion” that framed the act as the sometimes legally justified refusal to provide bodily life support to an innocent person, rather than intentional killing? Would we have been able to reach a compromise rather than wage a culture war? Maybe. But that’s water under the bridge now.

M. Cathleen Kaveny is the Darald and Juliet Libby Professor at Boston College, with appointments in both the Department of Theology and Law School. Her research and teaching focus on the intersection of law, religion, ethics, and morality.