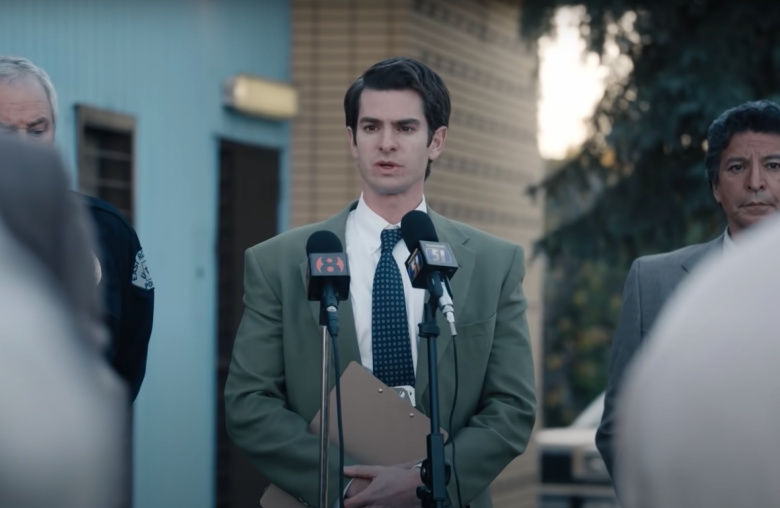 Andrew Garfield as Detective Jeb Pyre in “Under the Banner of Heaven” (2022).

Nearly 40 years after Latter-day Saint Brenda Lafferty and her 15-month-old daughter Erica were brutally murdered by brothers-in-law Dan and Ron Lafferty, the troubling case has returned once again to the public spotlight. The case has been a staple of pop culture since Jon Krakauer’s 2003 book Under the Banner of Heaven: A Story of Violent Faith. The book’s thesis was, in Krakauer’s intentionally ominous words, that the crime’s roots “lie deep in the history of an American religion practiced by millions.” As the story unfolds, Krakauer’s narrative describes Mormonism as a religion steeped in violence bubbling just underneath the surface. Academy award-winning screenwriter Dustin Lance Black, himself a former Mormon, revives the story—and Krakauer’s thesis—in the 2022 FX/Hulu series of the same name, “Under the Banner of Heaven.”

Members of the Church of Jesus Christ of Latter-day Saints have largely enjoyed an era of tolerance over the past century, though they are the second least liked religious group in America after Muslims. Yet, the representation of Latter-day Saints and their fundamentalist polygamous cousins as deluded and dangerous is a sticky stereotype tracing back to its earliest years. On the great scale of “good religion” and “bad religion” in the American consciousness, Mormonism has often fallen on the wrong side of the balance. Media has frequently been a key driver of that judgment in what scholar Brenda R. Weber describes as “mediated Mormonism’s” pedagogical value as an example of bad religion.

Much of the public discussion about the show and the book has centered on its “accuracy” in portraying Mormonism. Does it tell the truth about Latter-day Saint people, history, and culture? Krakauer and Black are quite clear about how they answer this question. The murders reveal a dark underbelly of Mormonism and its people. This suspicion about Mormons, that just under the surface they conceal a horrible secret that is dangerous, is made explicit. Tales of Mormons as dangerous, especially for women, fueled 19th-century pop culture. As “Under the Banner of Heaven” suggests, this remains a popular feature of mediated Mormonism today.

If Krakauer’s narrative reflected an outsider’s suspicion of Mormonism, Black’s screenplay represents a more intimate association with the faith, one that depicts a contest between mainstream, fundamentalist, and ex-Mormons. Black is a former member of the church, having left the faith in his teenage years. He portrays the encounter with these murders as the mainstream Latter-day Saints’ reckoning with Mormonism’s violent past (and presumed present).

Black’s narrative fictionalizes two of the main characters who walk the audience through why they have abandoned their faith. One is Allen Lafferty (played by Billy Howle), depicted as a former Mormon who regrets not getting his wife Brenda (Daisy Edgar-Jones) out of the church. The other is Detective Jeb Pyre (Andrew Garfield), a mainstream Mormon who experiences a crisis of faith in the course of his investigation of the crime and comes to see Mormonism as dangerous. The Mormonism that he had practiced now seems foreign and unsustainable; the “real” Mormonism is revealed as a religion that “breeds dangerous men.”

The police interrogation of Allen Lafferty is the narrative’s main device for exposing Mormonism. Allen asks Detective Pyre whether Brenda deserved to be murdered because she was disobedient to male authority. Pyre answers “no,” but Allen responds, “then you might not be as a good a Mormon as you think.” The “good Mormon” practices bad religion.

In contrast, Brenda, the victim of these horrific crimes, is framed as a warning. She is depicted as a proto-feminist, pursuing an education and career against the wishes of many of the men in her life and challenging sexual harassment. But her progressive Mormonism is suppressed, overtaken, and literally killed by the fundamentalist side. The meaning of her death is that reform cannot overcome the darkness within Mormonism itself.

THE MAIN THRUST OF the criticism directed at the book and TV series is that the popular discussion of the murders is a severe distortion of the Latter-day Saint tradition. I admit that my initial reaction tracked with many critics of the show. To me, the series often veered into heavy-handed, inauthentic, unfair, and inaccurate territory. The story leaves out that Mormonism has certainly produced its fair share of good and decent folks, and even some exceptionally good ones. Further, as Patrick Mason, the most important critic and chronicler of Mormonism and violence has demonstrated, Mormonism has not only spurred violence at the edges, but it has inspired a small pacifist tradition as well.

But upon further consideration, I worry that this critique evades the central problem that Krakauer and Black are raising. In my view, they have addressed the problem with insufficient rigor and care, but they are not the ones who created the problem. The problem is that religious individuals claiming access to divine instruction use and justify power, violence, heteropatriarchy, racism, and more, to hurt people.

The murders of Brenda and Erica Lafferty are not simply violence against a woman and child in a patriarchal society. Rather, these murders are done in specifically Mormon ways, drawing on Mormon ideology, stewed in the culture of the Mormon heartland, and performed ritualistically. These men killed because of a revelation they received. And they are not the only ones who have been entranced by a violent version of Mormonism.

It is worth exploring Krakauer’s and Black’s theory that it was Mormonism that killed Brenda and Erica. In his controversial essay in the Harvard Divinity Bulletin a few years ago, Robert Orsi made the claim that scholars of religion who are honest with themselves will admit the truth that, “religions have, over time, done more harm than good.” Orsi, one of the most influential living scholars of religion today, did not come at this conclusion as a hardened atheist who is antagonistic to religion, but after a long, close look at Catholic sex abuse in the last century. The sexual abuse revelations that unfolded over the last several decades have proved more horrible and widespread than previously imagined. Religion wasn’t an incidental factor. Orsi reported that one of his interviewees indicated that among those who were abused, “there was no one who was not abused in a Catholic way.” Abusers used Catholic symbolism, teachings, practices, clothing, and more as a context for their abuse.

What would it mean to think about those who abuse in Mormon ways? Conservative and fundamentalist Mormon violence is not the same as the violence and coverup of sexual abuse in the Catholic Church. But the fact is that Mormonism does have a persistence of right-wing extremists who operate both within the mainstream church and among its fundamentalist offshoots. The Laffertys were not only religious extremists, but they were also involved in far-right politics, including opposing federal authority and taxes. This isn’t just an accident in modern Mormonism. Ezra Taft Benson was a senior leader who rose to the office of president of the church in the second half of the 20th century. Benson was drawn to the John Birch Society and other extremist ideologies, and his teachings continue to contribute to the radicalization of many Latter-day Saints.

So, it isn’t just fundamentalist polygamous Mormons who embrace these ideas. This brand of Mormonism inspired an online collective of Mormon separatists and fascists known as #DezNat (short for Deseret Nationalism) in recent years. It also inspired the Bundy family who led an armed stand-off against the federal government in 2014 and an armed takeover of federal property in 2016, which led to the death of one of their men. The Bundys are members of the mainstream Church of Jesus Christ of Latter-day Saints in good standing.

There are many ways that the Lafferty murderers abused and killed in Mormon ways, with revelation at the forefront. Speaking with God can be dangerous business. Mormonism seeks to contain this authority by centralizing revelation in church leaders, but it also democratizes revelation, empowering people to seek their own wisdom and giving power to those who abuse it. One of Joseph Smith’s most famous letters was penned while imprisoned in Missouri, and it soberly warns: “We have learned by sad experience that it is the nature and disposition of almost all men as soon as they get a little authority as they suppose they will immediately begin to exercise unrighteous dominion.” It is a remarkably self-critical comment demonstrating how the power of the church itself can corrupt.

Murder in Mormon ways isn’t quite paradigmatic, but neither can it simply be dismissed as an aberration. The task of the scholar of religion, and any critical observer of religion, is to ask what this does tell us. Religion is not only a source for good—it can also be deadly. “Under the Banner of Heaven” picks at this problem imperfectly, but the problem is real.

Taylor G. Petrey is chair of the Religion department at Kalamazoo College and the author of Tabernacles of Clay: Sexuality and Gender in Modern Mormonism.