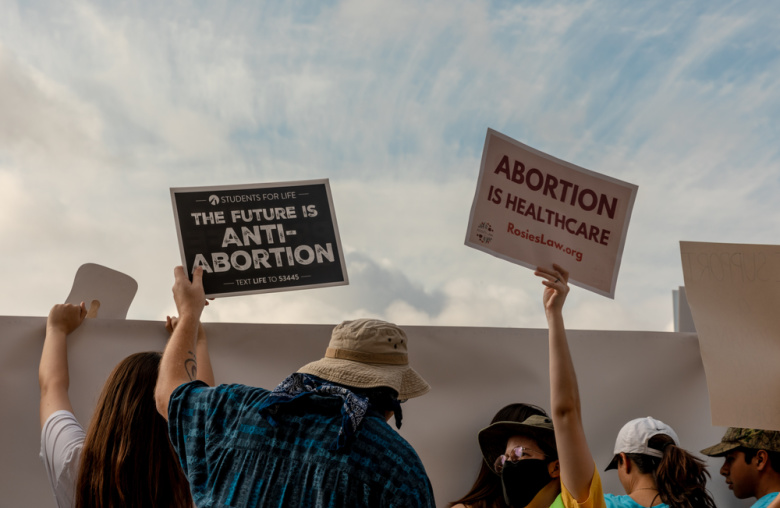 A new form of sanctuary is taking shape in California. In December 2021, after a Texas law severely curbed abortion rights and Roe v. Wade looked increasingly endangered, the state of California announced its intention to become a legal sanctuary for those seeking abortions. The idea of sanctuary has deep religious roots, and sanctuary movements have been most closely tied to protecting undocumented immigrants from deportation. Now they are also taking on abortion.

In fact, back in Texas, a competing sanctuary movement for the unborn helped birth Texas’s latest anti-abortion law. It began with anti-abortion activists creating sanctuary cities for the unborn, which banned abortion within municipalities. Many of those bans also contained the proviso that ordinary citizens could sue those who aided an abortion—a guideline now in place statewide. These opposing sanctuary movements in California and Texas show the enduring appeal and malleability of offering sanctuary for both progressives and conservatives, even as these new forms of sanctuary hearken back to their predecessors in the last century.

The term “sanctuary” comes from the Latin sanctuarium and refers simultaneously to the holy places that people took refuge in and the term’s social meaning as a refuge. In the Hebrew Bible, Mosaic law prescribes the establishment of sanctuary cities so that those who commit accidental manslaughter might escape the reprisal of the victim’s family. Carrying this tradition forward, churches in the Middle Ages also served as sanctuaries where those accused of crimes could flee for a predetermined period of time before facing trail or abjuring the realm. The best-known example of sanctuary that appears in popular culture is undoubtedly Victor Hugo’s The Hunchback of Notre Dame, which features medieval church sanctuary as an important plot point.

Today, the idea of sanctuary is probably best known for being linked with progressive social movements starting in the twentieth century, when activists sought to resist federal policy by physically housing draft resisters and Central American asylum seekers in houses of worship. California actually created the very first sanctuary city in 1971, offering a place of refuge in Berkeley for Vietnam War draft resisters. In the 1980s, as a wave of Central American asylum seekers came to the U.S., the Sanctuary Movement—made up of Christian and Jewish activists—sprung up to house them. The specifics on where recipients were housed varied—it could be in a house of worship, an apartment paid for by a faith community, or in a community member’s home. More recently, the so-called New Sanctuary Movement has organized to protect undocumented immigrants from deportation, and once again some churches have opened their literal sanctuaries to house migrants. For the past decade, a network of sanctuary cities and college campuses have also pledged to forbid collaboration of their law enforcement agencies with immigration officials.

The recent sanctuary proposal in California is straightforward. In a press conference responding to a report from the California Future of Abortion Council, which Governor Gavin Newsom convened in September of 2021, the governor quipped: “We’ll be a sanctuary.” The report outlines some 45 proposals to expand access to abortion for Californians and to pay for transportation and reproductive care for the some 1.4 million who reside outside of California but would find their closest abortion provider in the state. A further proposal suggests student-debt incentives and scholarships for those health care workers who agree to provide abortions. A similar proposal is also being considered in New York, where Attorney General Letitia James has outlined a proposal for the state to serve as a “safe haven” for those seeking abortions, in a move that has been called a sanctuary proposal. Likewise, Governor Kathy Hochul has endorsed making New York a “safe harbor” for abortion rights.

These state officials who endorse abortion sanctuary proposals are not likely to explicitly cite their faith, though there are many progressive faith leaders who advocate for abortion rights while invoking their religious beliefs. Those who pioneered the movement for sanctuary cities for the unborn are likewise straightforward in their use of religious language. They espouse slogans like “fearing God more than the ACLU” and #Loveoneanother, a reference to the biblical verse John 13:34. The movement keeps a record of municipalities that have agreed to ban abortion in their limits (Lubbock, Texas, and Hayes Center, Nebraska), as well as a list of those who have voted down such measures (Mineral Wells, Texas, and Jacksboro, Texas).

Two aspects of sanctuary’s rich biblical tradition are carried forward in California’s abortion sanctuary proposal, as well as the sanctuary cities for the unborn movement: spatial demarcation and fear. Sanctuary divides space into zones of safety and danger. In the Sanctuary Movement of the 1980s, houses of worship were fashioned into zones of safety for Central Americans, and for sailors in San Diego in 1972 who were seeking to avoid deployment to the Vietnam War. Crucially, these zones of safety are not inviolable—anyone with enough might or power could overcome them. Rather, they are spiritual, political, and social divisions that nonetheless have power. Houses of worship in previous sanctuary movements relied on guidance from immigration officials not to enter religious spaces, as opposed to a law forbidding them to do so.

Likewise, one of the most important features of sanctuary across time and space is fear; fear is the central qualification for receiving sanctuary. In the biblical tradition, that fear was for one’s life after an accidental homicide. In the Sanctuary Movement of the 1980s, recipients gave testimonios that centered their fear in order to secure their status as refugees, thus qualifying them for sanctuary. In California’s abortion sanctuary, fear is focused on the loss of abortion access in a post-Roe world. Time will tell if there are similar testimonies of fear in that sanctuary movement, but the proposal’s status as a legislative initiative means that there is ample opportunity to hear from those most affected by anti-abortion legislation.

While Governor Newsom’s press conference did not feature a phalanx of clergy on either side of him, it was clear that California’s abortion sanctuary initiative shared something in common with previous sanctuary movements—it was public and provocative. Modern-day sanctuary movements thrive on publicity. In 1982, no fewer than six different houses of worship proclaimed themselves sanctuary churches, but it was the scene at Southside Presbyterian Church in Tucson, Arizona, that remains indelibly etched into the public’s imagination. With reporters, a refugee, and supporters gathered in front of the church, the church’s pastor, John Fife, made the announcement flanked by banners that read “La Migra No Profana el Santuario” (“Immigration Officers Do Not Profane the Sanctuary”) and “Este Es el Santuario de Dios para Los Oprimidos de Centro America” (“This is the Sanctuary of God for the Oppressed of Central America”). While media coverage began locally, later coverage of the trials of sanctuary activists would return to this scene again and again over the years, as the movement showed a deft capability to garner news coverage.

Modern-day sanctuary movements also have a tense relationship with the law. Variously, these movements style themselves as both fulfilling and resisting the law. In California’s case, their abortion sanctuary is a bit of both. It simultaneously opposes the rollback of what they perceive as a “constitutional right to abortion,” while styling itself as a protector of that right for “millions more people seeking abortion care as other states adopt extreme bans on an essential health service,” according to the state’s report. Likewise, the sanctuary cities for the unborn movement sees itself as safeguarding the right to life, in the face of federal and state laws that would circumvent that right.

This give-and-take with the law is common in sanctuary movements for immigration. In the 1980s, activists saw themselves as fulfilling responsibilities under the Refugee Act of 1980 that the Reagan administration had abrogated, even taking on the role of border enforcer by determining whether migrants were refugees or simply “economic migrants.” In the New Sanctuary Movement, activists have refused to cooperate with U.S. Immigration and Customs Enforcement (ICE ) or comply with immigration laws that they deem unjust. They instead appeal to a higher moral law, with reasoning that is very similar to the sanctuary cities for the unborn movement.

This tension showcases what is perhaps the most important facet of sanctuary in modern-day movements—it is a powerful tool for critiquing federal and state policy. Whether it was the Vietnam War and the draft, the Reagan administration’s Central America policy, current immigration policy, or the changing landscape of reproductive access and rights, sanctuary provides a potent framework for critiquing policies and enacting autonomous spaces that are spiritually and socially free from incursion, even as they remain somewhat legally dubious.

Sanctuary will continue to have a profound political and religious impact. In addition to California’s abortion sanctuary proposal and the sanctuary cities for the unborn movement, Second Amendment or gun sanctuaries are also gaining popularity. Sometimes the Second Amendment sanctuary movement is dismissed as merely parodying the language of progressive sanctuary movements. The person who coined the term, Bryan Kilber, readily admits this, telling the Associated Press that Second Amendment sanctuaries are “just stealing the language that sanctuary cities use.” But that movement has far more in common with modern-day sanctuary movements than its language. It too is focused on publicity, grounded in fear, and enjoys an uneasy relationship with legality, even as it remains a potent tool for critiquing federal and state policy.

Sanctuary is neither conservative nor liberal. It is a complex practice and strategy that continues to have relevance. While good news for sanctuary scholars like myself, who will enjoy ample opportunity to study sanctuary movements as they materialize, what it means for the future of the United States is yet to be established. Sanctuary movements are both a symptom of and a cause of our fractured polity, as we struggle to reach consensus on basic concepts like law, freedom, and justice. It is hard not to feel a sense of foreboding about such fissures, from which there will be no easy refuge.

Michael Woolf is a postdoctoral fellow at Harvard Divinity School and the senior minister of Lake Street Church of Evanston, IL. He is an ordained American Baptist minister and holds a Doctor of Theology degree from Harvard Divinity School. He writes about sanctuary, theology, and reparations, and you can follow him on Twitter at @RevMichaelWoolf.

The Christian Nationalism of Donald Trump

END_OF_DOCUMENT_TOKEN_TO_BE_REPLACED

Mourning Michael Gerson, Washington Post columnist and @CtrRelPol board member, who has died at age 58.… https://t.co/OuYnHEuYV6