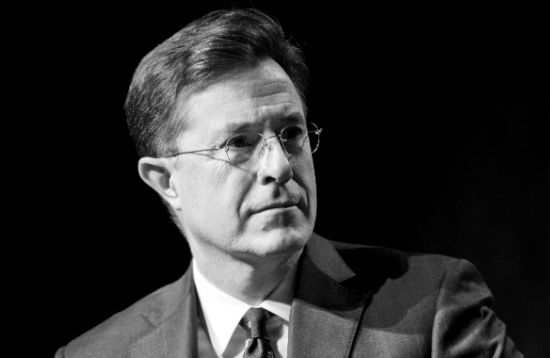 Between the ending of The Colbert Report and the beginning of the Late Show, Stephen Colbert stopped in at the offices of America Media for a quick chat with Father James Martin. In the 10 months between his two shows, he’s done few broadcast interviews with other media. America Media, which includes a magazine subtitled “The National Catholic Review,” appears to be a special exception.

The conversation is brief, only six minutes. Colbert and Martin crack jokes about Lent, the pope, and Saint Peter. And then, right at the end, Colbert gets serious. He talks about his favorite scripture, a slightly misquoted passage from Matthew 6: “So I say to you do not worry but who by worrying could change a single hair on his head or add a cubit span of his life? … Sufficient unto the day is the evil thereof.” He loves it because, “to stay mindful, you have to not live in fear. So ‘do not worry’ allows you to be mindful and to be grateful and ultimately I suppose to be joyful, and everything comes from that.” He adds, “That’s why I like comedy. It’s autonomic that you can’t laugh and be afraid at the same time.”

It’s a rare, candid moment for viewers accustomed to the vain, conservative idiot that Colbert played for nearly nine years on his own show on Comedy Central. But it’s no secret that Colbert’s faith is a driving force in his life: His character has joked that he’s America’s most famous Catholic, and Colbert the man has given interviews in which he discusses how his belief has helped him to cope with the early death of father and two older brothers in a plane crash when he was a child.

His religion would occasionally creep out on the show, as well. On The Colbert Report, he rarely broke character, but when interviewing guests, he would sometimes step back slightly, softening the persona just enough to let the guest get comfortable. That is, until he got excited enough about a theological argument to nearly abandon the pretense altogether. The neat trick he pulled is to first satirize belief, going just far enough to get a laugh, only then showing his hand.

Take this 2009 interview with the New Testament scholar Bart Ehrman, famed for discarding his Christian faith. First, Colbert jokes that he had handed Ehrman’s head to him on the last appearance. Ehrman says, “I remember you thought that.” Colbert replies, “Yeah, yeah I thought that, and so did God, who sees all and knows all, my friend.” The inflection is perfect, making God’s omniscience part of the running Colbert punchline about the character’s overblown vanity. Then, Colbert, relaxed but still serious, proceeds to refute every one of Ehrman’s points about the divinity of Jesus with scriptural references and analogies.

Perhaps the best moment came in 2008 when Colbert interviewed Philip Zimbardo, the author of The Lucifer Effect and the researcher who conducted the Stanford Prison Experiment, a psychological study which ended up being abandoned partway through when objections were raised over its morality. Zimbardo used the experiment as a lead-in to a discussion of evil and the danger of unjust authority. Colbert tripped him up over the question of the source of evil, finally delivering a catechism-perfect explanation: “Hell was created by Satan’s disobedience to God, and his purposeful removal from God’s love—which is what hell is. Removing yourself from God’s love. You send yourself to hell. God does not send you there.” When Zimbardo remarked that Colbert must have learned well in Sunday School, Colbert, grinning, said, “I teach Sunday School, mother***ker!”

An argument that goes around periodically is that Colbert, though ostensibly a comedian, is really a moralist. In America magazine, Patrick R. Manning argued that Catholic catechists had much to learn from Colbert, because he exemplifies “a formula for effective catechesis proffered by St. Augustine of Hippo in the fourth and fifth centuries: delight, instruct and persuade.”

Colbert himself might dispute this characterization, except perhaps for the delight part. In an interview with David Steinberg on Showtime’s Inside Comedy, he explains, “What’s nice about the format of the show … is that you bring the audience along and educate them only to the extent to get to the joke you wish to tell. People say, ‘Oh you’re a journalist!’ And I’m like, ‘I know you mean that as a compliment, but stop it!’” He adds, “Really it’s just for the jokes.”

Which raises the question: If the humor itself is the point, then what does comedy have to do with religion?

Perhaps there’s no relationship, of course. Colbert says he’s funny because he grew up in a family of funny people. But I’m not convinced the answer is so simple.

First of all, there is something about belief in general, and Christianity in specific, that can be supremely comic. The extravagancies of language—which can be sublime to members but purple and bombastic to outsiders—and the prevalence of myth, the perceived groupthink, the idea of making decisions and commitments based on something that is difficult to describe and impossible to see, hear or touch in its most essential form. I’m sure I’m not the only one who’s floated out of a world-changing service to find myself immediately deflated by the fact that four-way stops are still infuriating, and I have no idea where I left my phone. The attempt to merge the ideals and principles of a heavenly timeframe with the thousand small tragedies of everyday life is, often, hilarious.

That isn’t to say that atheists can’t be funny. However, they tend to get the humor from the opposite place, juxtaposing the absurdity of daily life with the nothingness that awaits after death. “Lol, nothing matters,” in Twitter-speak. Either way, the difference in scale is the same.

There is also this: Few schools of thought have as much skepticism for the ego as Catholicism and some Eastern religions. The catechism shrinks individual desire almost to the vanishing point, noting that pride, or undue self-love, is one of the seven deadly sins, and humility is the foundation of communication with God through prayer.

Humor, in fact, can be an effective deterrent to such a sin. “Humor can then be a real asset in developing humility,” notes Stephen Okey, a theology professor. “With a sense of humor, I can laugh at myself. I can remember that I am not actually the center of the cosmos. Whenever I become puffed up with pride and consider myself to be greater than I really am, gentle teasing might knock me down an appropriate number of pegs.” In this model, humor and self-deprecation are necessary correctives to an ego in danger of taking one too far from God.

So Colbert, by mocking the self-aggrandizing blowhards who are quick to boast their righteousness and claim religious liberty as a shield when convenient, is demolishing not just those individuals but also the ego-serving impulses that lead in that direction. In a conversation with Charlie Rose in 2006, Colbert said that he originally started out in theatre, but realized he didn’t like the self-seriousness, or the people, so he moved on to comedy:

I found that when I did comedy, and I messed up on stage, like if I blew a line onstage in comedy, there would be laughter from backstage at my failure. And I found that so much healthier than if I blew a line in drama, because you would go backstage and people were going, ‘how’s it going out there? Sounds awfully quiet, you know?’ And I thought oh, I like these people, I like these people more than these people, and I surrendered my need for importance. You know what I mean? I surrendered my need to have status.” (Disclosure: I’m currently a staffer at the Charlie Rose show.)

Those people he didn’t like aren’t so different from the character Colbert put on with his suit every night on Comedy Central. He literally became a different guy on set, a guy his wife complained about if he showed up at the house in character, a guy full to bursting of ego, whose desire to be adored is so overwhelming that the opening titles have him descending godlike to earth in a winking simulation of the person that Colbert the man believes we should not be. He put off his ego in order to don one, which is another neat trick.

But my favorite example of the not-so-secret theism that undergirded the show is this: Colbert calls his outfit the “joy machine.” He’s used the term to reference the workings at the soon-to-be Late Show as well as The Colbert Report. It stands for both theology and practiced religion in this case, meaning that he’s talking about both process and outcomes. The work is, or should be, as joyful for the people who make it as those who consume it. He said to GQ, “That’s what liking process gets you to, the ability to process a great deal of information. And everybody in this building can do it. Everybody was jumping in. Everybody had ideas. Everybody was saying, ‘What is an unasked added value that I can give the show?’ And that is true joy. That’s the joy machine.”

Joy is also a deeply Christian principle, one that spans the continuum from satisfaction to contentment to glee and dwarfs each point individually. Pope Francis wrote in “The Church of Mercy,” a book of his compiled writings and speeches from his first year as pope: “And here the first word that I wish to say to you: joy! Do not be men and women of sadness: a Christian can never be sad! Never give way to discouragement! Ours is not a joy born of having many possessions, but of having encountered a Person: Jesus, in our midst.”

Colbert, who has had more than the usual number of reasons to be sad, has taken this admonition to heart. According to GQ, there used to be a note taped to his computer, with a quote from the Jesuit priest Pierre Teilhard de Chardin, which read, “Joy is the most infallible sign of the existence of God.” One can imagine him remembering those words as he walks into the Ed Sullivan theatre this morning, starting up the joy machine for another day.

Xarissa Holdaway is the deputy editor for digital at Charlie Rose. She lives in New York City and tweets about candy and TV here.