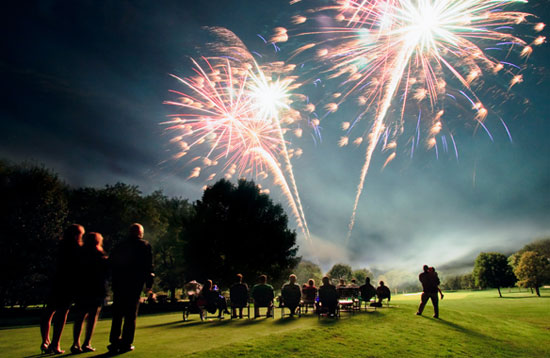 Tonight, one of the nation’s biggest Fourth of July celebrations will take place in Provo, Utah, in front of 50,000 people at Brigham Young University’s football field. The “Stadium of Fire” lives up to its name. It is among America’s oldest and largest arena-based firework productions, one that typically keeps its crowd in a state of pyrotechnic bliss well into the night. Its creators promise a night to “celebrate, teach, honor, and strengthen the traditional American values of family, freedom, God, and country.” This year, Stadium of Fire features musical performances from the Beach Boys and American Idol winner Scotty McCreery—making it a concert, a fireworks production, and a revival for American civil religion, all rolled into one.

Though the event is supposed to be non-denominational and non-political, it is overwhelmingly attended by Mormons. It also hosts a constant string of Mormon headliners. Over the years, several generations of Osmonds have taken the stage, along with political figures Sean Hannity and Mormon convert Glenn Beck. Corporations owned by the LDS Church partially fund the celebration. And the event planners aim to please, and to make money from, an audience almost exclusively made up of the white, Republican-leaning Mormons of Utah County. So they give them what they want: bright lights, big noises and red-blooded patriotic American pop music.

Stadium of Fire is the signature event of America’s Freedom Festival, a “private, non-profit, non-political foundation” which hosts patriotic events year-round and traces its roots back to 1870, nearly twenty years before Utah even became a state. Its over-the-top, Independence Day festivities continue to showcase the patriotism of local Mormons. But why do Mormons, perhaps more than the rest of America’s faithful, love the Fourth of July?

In the twenty-first century, Mormons have become known for their patriotism. Latter-day Saints fill a large number of high-profile elected positions (think Mitt Romney and Harry Reid). Mormons join the armed forces, the CIA, and the FBI at high rates, often recruited straight out of Brigham Young University. Mormonism is, after all, often referred to as the “American faith,” an appropriate descriptor not only because Mormonism was founded on American soil, but also because LDS tenets, perhaps more so than other faiths, match typically “American” values like family, patriotism, hard work, and economic success.

Mormons have always believed in America, particularly in America as a sacred geography. Shortly after the church’s organization in 1830, Mormonism’s founder and first prophet, Joseph Smith, declared Jackson County, Missouri—then America’s frontier, today America’s heartland—to be the location of Christ’s Second Coming. (This belief is still memorized by Mormon grade-school children who, in Sunday school classes, recite the belief that “Zion (the New Jerusalem) will be built upon the American continent,” which is part of the church’s official Articles of Faith.) Along with geography, Joseph Smith sacralized the American government. One of Smith’s early revelations declared that the Lord “established the Constitution of this land, by the hands of wise men whom I raised up unto this very purpose.” In an age when many religions sought to adopt nationalist precepts, Mormons placed American governmental canon squarely within their own theological corpus.

This devotion to the nation, however, has been tried and tested throughout Mormon history. As much as it seems absolute today, Mormons have historically been ambivalent about their patriotism. This ambivalence has often manifested at moments of national celebrations—especially the Fourth of July—when faith and patriotism most immediately intersect.

Shortly after Joseph Smith was killed by an anti-Mormon mob in Illinois in June 1844, Parley Pratt, one of the church’s apostles and most prolific writers, expressed his disgust with the American nation, while also reaffirming his commitment to America’s founding principles. In an editorial published in the Saints’ New York newspaper, and titled “American Independence Declared over Again; with Amendments to Suit the Times,” Pratt wrote:

We hold these truths to be self-evident, that the “Mormons,” in common with all others, are possessed of certain inalienable rights; among which, are life, liberty, and the pursuit of happiness, including the right to worship Almighty God according to the dictates of their own consciences.

As Frederick Douglass would do eight years later in “The Meaning of the July Fourth For a Negro,” Pratt channeled his inner-Jefferson to satirically denounce Jefferson’s successors. He explained how “Americans have utterly made void the most sacred constitutions, laws, and charters made by themselves” when they refused to come to the aide of the beleaguered Mormons, and most importantly, when they stood idly by while the Mormons’ beloved prophet, Joseph Smith, was assassinated.

This tension, between Mormons championing American ideals while pining for a government to protect their religious liberties, came to a head in the 1870s and 1880s as the LDS Church battled with America over the Mormons’ practice of polygamy. During this period, Independence Day celebrations in Utah were more likely to exhibit condemnation of the America than praise. On the Fourth of July, 1885, LDS businesses, homes, tabernacles, and temples flew the American flag at half-mast. That was the same year leading Mormon polygamists were thrown in jail for violating the Edmunds Act, an anti-polygamy statute. On this occasion, America’s birthday was not a day to celebrate, the Saints’ believed, but a day to mourn America’s failure to protect Mormons’ free exercise of religion. Eliza R. Snow, Mormonism’s unofficial poetess laureate, captured the mood in the opening stanza to that year’s Independence Day poem, aptly titled “Requiem”:

The glorious reign of Freedom past,
Her flag has fallen down half-mast!
Let every patriot drop a tear
And weep, yes weep, o’er Freedom’s bier.
Toll—toll—toll—toll the bell;
Hark, hark—‘tis Freedom’s funeral knell.

But this period of contestation and protest did not last forever. In the 1890s, Mormons renounced polygamy, achieved statehood, and solidified their position within the boundaries of America’s political culture.

In the twentieth century, Mormons sought to prove that they were the most patriotic citizens in the nation. This impulse reached its apogee at mid-century when the culture wars at home and the Cold War abroad led several prominent LDS figures—most notably Apostle (and later church president) Ezra Taft Benson, and popular educator and writer, Cleon Skousen—to equate Mormon doctrine and culture with the rising anti-communist, Religious Right. Joseph Smith’s revelations from a century before that exalted the American nation and Constitution were repeated as official Mormon scripture and imbued with new meaning. Many Mormons saw America as a nation “under God,” engaged in a holy war with godless communism.

Yet more recently, in the midst of its expansive international growth, the LDS Church has been forced to reconsider its devoted attachment to the United States. Today, more than fifty-six percent of the LDS Church lives outside U.S. borders. Mormon leaders are now trying to make the gospel of the “American faith” seem less “American” and more “international,” even “universal.” The LDS Church is promoting a new face of Mormonism: a racially and economically diverse membership that is growing exponentially outside of Mormondom in Utah. The church’s recent “I’m a Mormon” campaign is an indicator of a more heterogeneous public image. Such efforts may usher in a new chapter in the tenuous relationship between Mormonism and American patriotism.

Attendees of tonight’s patriotic festivities at BYU might easily forget these developments toward a more international church. No doubt the mood and message at BYU this Fourth of July will be pro-American. The LDS faithful, for the 31st year, will gather for the Stadium of Fire, to enjoy music, cutting-edge performance technology, and a breathtaking firework display. Above all, they will enjoy celebrating the founding of America—the birthplace of their American faith.