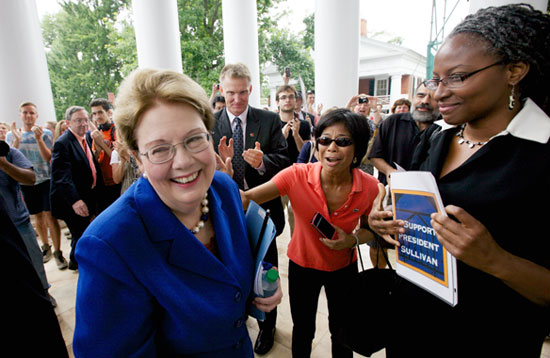 The forced resignation of University of Virginia President Teresa Sullivan, announced June 10, did not go as planned. Pushed out by a faction of the university’s governing body, the Board of Visitors, Sullivan was said to lack vision and “strategic dynamism,” a term appearing in a widely distributed email from Peter Kiernan, the then-chair of UVA’s Darden Business School Foundation Board. (He resigned shortly after the email went public.) Reporting on the forces behind the orchestrated firing, The Washington Post revealed that Sullivan’s Board critics felt she “lacked the mettle to trim or shut down programs that couldn’t sustain themselves financially, such as obscure academic departments in classics and German.” Classics and German, “obscure departments”? raged university stakeholders. What else is on the chopping block? Any subject that doesn’t easily lend itself to direct monetary gain?

In response, Sullivan received an extraordinary outpouring of support from thousands of faculty, staff, students, and alumni across the country. This outpouring was fueled, in large part, by outrage at the secretive and highly questionable procedures that the Board of Visitors had deployed to force Sullivan’s ouster. Thousands rallied on University Grounds this past Monday as the Board met to determine next steps. Rather than emerging in bold triumph to announce their cherry-picked new leader, Board Rector Helen Dragas and Vice Rector Mark Kington remained sequestered with the Board until nearly 3:00 a.m., when only a faithful remnant remained outside the Rotunda, to announce their safe choice of an interim from within the university. Leaving the Rotunda a few minutes later, Dragas was roundly booed—an unusual showing of wrath on Mr. Jefferson’s rarefied grounds.

Why is this story worth addressing in our journal? Because these events shed a searing light on the political pressures facing state universities across the United States. More specifically, they show the impact current conflicts are having on so-called “non-revenue-generating” entities, chiefly in the arts & sciences—where, incidentally, subjects like religion and politics are researched and analyzed. Teresa Sullivan’s forced resignation by a group of non-educators points to the power of political appointees, whatever their expertise (or lack thereof), to shape the future of higher education as they see fit and with little accountability to the public they serve. That the coup d’etat at UVA actually seems to have worked should frighten all of us who care about the civic role of public universities. (By the way, this is not about partisan politics: the Virginia Board is comprised equally of appointees made by former Democratic Governor Tim Kaine and Republican Governor Bob McDonnell.)

I received my A.B. in political and social thought from the University of Virginia in 1989, when state funding was several times what it is now. My tuition and living expenses were paid by my middle-class parents, a Republican businessman and a church secretary who were pleased that I was in a place steeped in Jeffersonian tradition. Blissfully naïve about institutional power, I doubt I could have named a single member of the Board of Visitors. I did, however, understand that the Commonwealth of Virginia helped subsidize the education even of out-of-state students like me, and that they did so because citizens and legislators across the political spectrum knew that a great university was essential to shaping individual character and thereby improving the public good. State support was an investment in a better future for all.

Today’s university students can no longer make such assumptions. For years, state legislators in states as wide-ranging as California, Texas, and New Jersey have faced looming budget deficits and have responded by cutting public funding of a wide array of institutions. University presidents, more and more, have become fundraisers and trimmers-in-chief, even as the pressure builds to turn to online education as a lucrative cure-all. (Indeed, evidence is still mounting of Board members’ rather sudden infatuation with the profits to be gained from online courses, a subject they apparently believed needed quick action rather than Sullivan’s “incrementalism.”) No one doubts the need to cut costs and raise operating revenue, but there is an increasingly lively debate about where such financial shifts make the most sense and create more good than harm.

Or at least, there should be. In fact, the most alarming aspect of the UVA case is the very lack of such debate among university stakeholders: not once were questions publicly raised about Sullivan’s fundraising abilities, nor has there yet been an open discussion of university priorities and how groups such as alumni may be called upon to fill the void created by state cuts. Instead, on a sleepy summer Sunday, we learned via email of an admired president’s humiliating ouster, followed by Board members’ relentless refusal to offer a clear justification of their actions. As former President John Casteen (who served from 1990-2009) noted in a very public criticism of Rector Dragas and the Board, “In Virginia, you can’t make secret plans for the allocation of public resources.” Except that now, apparently, they can. Notably, in the absence of any reasoned public defense by the Board, scathing parodies are filling the void.

The study of religion is not a notable revenue generator, and in hindsight it seems almost pointed that, in a strategic plan presented to the Board in early May, President Sullivan praised religious studies at UVA as one of “the fields that bring [the University] the greatest distinction” while also noting it is not among “those in which most people would today invest.” Sullivan was right on point: religion has historically played, and continues to play, an extraordinary role in the social and political life of virtually every culture we know anything about; and a thoroughgoing liberal arts education should include immersion of the sort offered by the UVA religious studies faculty. If the social value of educating students in global religious traditions and their impact upon the world isn’t clear to the Board, there are a lot of other institutions that will be more than glad to raid that excellent department and get some humanities faculty salaries off the Board’s hands.

Inspired by my own outstanding undergraduate education and brilliant UVA professors, I went on to get a Ph.D. in religious studies, at Harvard University, so that I could in turn serve other students. For more than 15 years, students in my courses have vigorously debated a broad range of topics relating to religion’s role in American political life, past and present: women’s participation in public and private spheres, the status of so-called cults, the boundaries of church and state, gay marriage, and many more. I have tried to give students the same kind of close attention and mentorship that my great UVA teachers gave me. Outside of my family, teaching and scholarship have been my chief contributions to society, and I’m proud that some of my own students have themselves gone on to become professors. Privileged to hold successive professorships at Princeton, Harvard, and Washington Universities, I have never doubted that my own public undergraduate education equaled that of those private institutions, nor that it greatly enabled any success I have had. UVA shaped my intellectual trajectory and cemented principles of honor, integrity, and trust that I have tried to embody in my professional as well as personal life. In the wake of President Sullivan’s firing, it is urgent that we have a long public discussion about the potential erosion of those values.

Public education has long been political—how could it not be? But when pure profit motives take over universities, we are left with educational systems that pander to politicians and opportunists with the latest nostrum to capitalize on. That course looks doomed to fail the test of a true education: giving students the deep learning they need to be engaged, outward-focused citizens who are steeped in the marketplace of ideas, not simply the marketplace of consumerism.